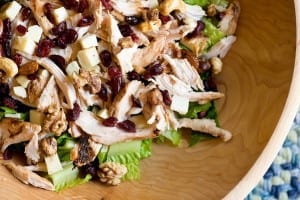 Method
Combine all ingredients until evenly mixed and keep in the fridge until
you are ready to serve.

How to BBQ your Turkey this Christmas: 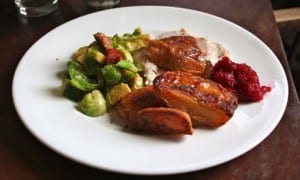 Begin by preparing your barbecue. Light the coals and wait until they’re covered in a fine layer of ash, then bank them to two sides of the barbecue. Place a container of water in between them – this may need refilling during cooking.

If you like, tie the wings to the side of the body and pull the legs together with butcher’s string.

Smear the bird in half the butter, squeeze the lemons over it and place the lemon halves in the cavity with the thyme and rosemary. Season the bird well with salt and pepper, inside and out.

Place on the grill and cover. You need a decent amount of air circulating, so the vents in the barbecue lid should be three-quarters open. If you have an oven thermometer, you want the temperature to remain at a relatively constant 180C.

Make a simple basting sauce by melting the rest of the butter and stirring in thyme and rosemary. Brush this over the bird a few times during cooking. The bird is ready when its internal temperature reaches 65C at the thickest point; mine took just over two hours.

If you don’t have a meat thermometer, sneak a peek at the flesh between thigh and body to make sure it’s cooked. Rest the bird for the best part of an hour, and serve with all the trimmings.

Thank you for supporting our small family business 🤗🤗 Dismiss